Ethereum cryptocurrency has an Alter ego – Ethereum Classic. About the reasons for its emergence and the prospects of investing in the coin – further in the material.

Contents of the article

The history of Ethereum

Ethereum (ETH) is a popular crypto project. It differs from bitcoin by its smart contracts and a number of other solutions. One of the developers is Vitalik Buterin, a programmer with Russian roots. In early 2013, he first introduced the concept of Ethereum. Further stages of the project’s development are as follows:

In 2016, the developers launched The DAO, a digital decentralized autonomous organization. It was a crowdfunding platform based on smart contracts. The decision to launch The DAO was largely decisive for the further history of the project’s development, as it was thanks to it that Ethereum Classic emerged.

How Ethereum Classic was created

In June 2016, attackers discovered a bug in The DAO’s software code, which gave them access to the project’s funds. There were two ways to solve the problem:

The developers chose the second option. At this point, an ideological problem arose. The fact is that one of the rules of decentralization, which the Ethereum team adhered to, says that “the code is the law”. Accordingly, it cannot be changed.

At the same time, the implemented hardfork, from a technical point of view, can be considered as a replacement of the vulnerable code. It turns out that such a decision is against the rules of the community.

To avoid confusion, the first version of the platform began to be called Ethereum Classic (ETC).

The updated version was renamed Ethereum.

Is it worth investing in Ethereum in 2022

As of early May 2022, Ethereum developers continue to work on converting the cryptocurrency from the extremely energy-consuming PoW mining algorithm to its more environmentally friendly counterpart, PoS.

In the cryptocurrency community, the updated version of the project, which its team aims for, is called ETH 2.0. Many investors believe that the improvement of the technical component of the cryptocurrency will cause the growth of its rate. Analysts at Goldman Sachs believe that the changes will increase the value of Ethereum, making the coin a means of saving assets.

At the same time, some members of the cryptocommunity believe that ETH may have a deeper fall before the next exit to the growth.

Is it worth investing in Ethereum Classic in 2022

Despite the fact that Ethereum Classic lags far behind its “updated” version in the capitalization rating, the project is still interesting to the cryptocurrency community. The developers continue to work on improving the technical component of the project. 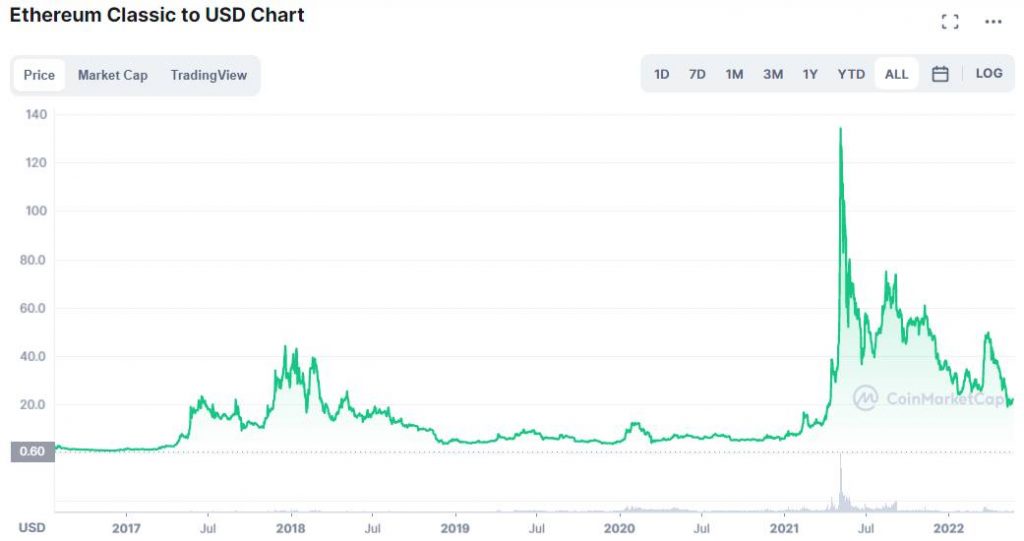 One of the latest growth spurts of Ethereum Classic is associated with the publication of news in the project’s microblog about the developers’ preparations for the next hard fork in its network – Magneto. It turns out that ETC can be still considered as an asset for earning on trading.

In addition, Ethereum Classic, like Ethereum, is one of the oldest cryptocurrencies. It is ranked 29rd in the world in terms of capitalization, which is a good enough position. Many stores around the world accept it.

The fact that many people underestimated ETC at the time allowed owners of this coin to earn good money from its growth in 2017-2018 and 2021 (though, in the first half of 2021, the crypto market as a whole grew a lot).

Overall, Ethereum Classic cannot be considered a stable asset. It is characterized by sharp rate hikes, which end up falling and fluctuating around the same mark for a couple of years. Now the rate of ETC is decreasing, which is a good opportunity to buy the coin. In May 2022 its value is small – about $22, but it may well grow several times in the foreseeable future.

There are certain prerequisites for this. First of all, stable support from the crypto community and users can positively influence the movement of the ETC exchange rate. Also, given the announced transition of Ethereum to the PoS algorithm, many owners of mining equipment will switch to mining Ethereum Classic, which will add popularity to this coin.

It turns out that Ethereum and Ethereum Classic have common roots, but are developing separately today.

Development teams are working on improving each of the cryptocurrencies. At the same time, if we go deeper into charts and figures, Ethereum Classic has the best growth result in 2021.

However, both cryptocurrencies repeat the movements of bitcoin. Accordingly, their growth output depends largely on the behavior of BTC and general investor sentiment. 2022 is not off to a good start.