Formal similarity of some parameters of ETC and ETH systems does not mean functional similarity. Different approach to initial possibilities “on output” gives a difference both in technical parameters and in socio-economic realization of platforms’ potential. Therefore, in order to determine how the systems differ from each other, let us consider the technical and social factors separately.

Technical differences between ETC and ETH

Based on both network smart contracts, users can issue their own tokens and manage their own blockchain projects. However, tokens of the ERC 20 standard (the Ethereum platform) are so popular that, according to rough estimates by experts, about 30% of all blockchain startups choose the ERC 20 smart contract. The “parent” system, on the other hand, does not enjoy such popularity.

The transformation of the consensus mechanism is also going differently. While Ethereum considers it necessary to phase out PoW – through a hybrid version of PoS+PoW – with a full transition to the PoS consensus mechanism in the future, Ethereum Classic voices the intention to continue using PoW.

In addition, in the spring of 2018, Corey Burns (programmer at Ethereum Classic) published an application known as ECIP-1043. It contained a proposal to change the algorithm, which, if approved, would open up the possibility of mining the coin using ASIC devices. In this case, it is not clear how the initiative of ETC’s developers is consistent with the basic postulate, according to which “the code is an immutable law.

Although it is not yet the fact that in the fight “ASIC vs. asic-resistant cryptocurrencies” the latter will win, but also to go to the conscious ease of creating specialized mining equipment in Ethereum do not want, creating a so-called “digital resistance” – the “front”, which is joined by ZCash, Monero and some other cryptocurrencies.

The essential technical parameter by which ETC is slightly ahead of ETH is the block generation speed: 13.7 seconds in Ether and 12.9 seconds in the Classic version (with the prospect of acceleration). But with the introduction of new protocol releases, this block generation period in Ether should also be reduced.

Ideological differences between ETC and ETH

Ethereum has surpassed not only Ethereum Classic, but all other cryptocurrencies, including Bitcoin, in terms of interaction with various state and business structures. Now with the Ethereum network, there is a situation where the reputation of the platform and key figures in the developers makes it attractive and in demand in the implementation of mass government projects around the world, and the possibility of practical implementation of technologies, in turn, works on the reputation.

Unlike many other coins (including bitcoin), Ether has almost freed itself from the notoriety of a cryptocurrency created to conduct criminal activity. Today, its ecosystem, on which many other projects operate, is an entire empire, the parts of which add up to the total value of the entire system. Ethereum Classic cannot yet boast of such a scale of implementation in real economic projects. For comparison, we can give a list of the most famous examples of the use of both cryptocurrencies and a list of references to them in the media. Let’s look at Ethereum (ETH).

By comparison, during the same period under review, most of the news related to Ethereum Classic was about the coin’s introduction into the listing of the next exchange. There were almost no reports about its introduction into socio-economic structures. But there was information about calculations given by one researcher from Sao Paulo University in Brazil, who claimed that investing just $55-85 million to hack Ethereum Classic could bring $1 billion to attackers, and would most likely bankrupt the crypto network. However, ETC in the study was taken as an illustrative example, but in general the discussion was about the vulnerability of all PoW-based networks. 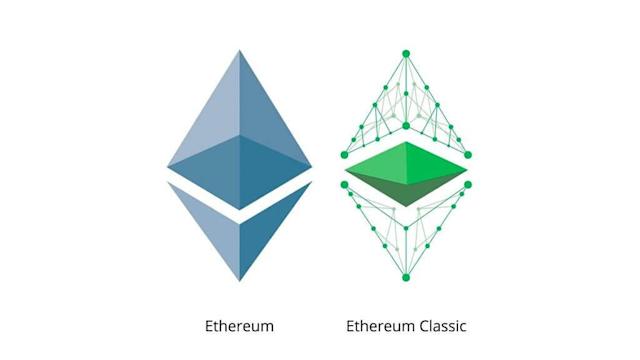 As in the Chinese government’s ranking, Ethereum is well ahead of Ethereum Classic in Coinmarketcap’s composite cryptocurrency ranking. Since the ranking evaluates the position of coins based on a number of key criteria, it is easier to demonstrate the list of differences between Ethereum Classic and Ethereum proper in the table.

Both coins have high volatility, but this is a property of all cryptocurrency assets. At the same time, there is an ongoing discussion in the crypto community about the possibility of repeated attempts to collapse ETC, which is blamed on major crypto market players who support ETH. Forums often claim that ETH supporters are also holders of about 10% of all ETC coins, which allows them to influence the market and partially control the price of ETCs. All this makes the prospects of the classic version of the coin less bright than those of the well-known Ether.